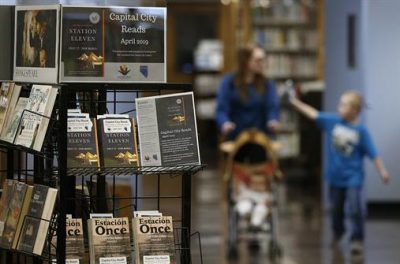 When selecting a book to highlight this year’s theme for National Library Week, “Libraries = Strong Communities,” it may not seem fitting to pick one about the collapse of modern society.

“It’s a dystopian book, but it’s a hopeful book,” Lauder said. “It talks about rebuilding community with the help of arts and culture after a devastating pandemic disaster.”

Sponsored by the Friends of the Carson City Library, Capital City Reads encourages the entire community to read a common book then meet together for activities and discussion.

“Reading can be an isolated activity,” Lauder said. “Capital City Reads brings people together. It can be really fun and bring out new ideas as people discuss the book as a community.”

The book centers around Kirsten Raymonde, who, according to the publisher’s website, “moves between the settlements of the altered world with a small troupe of actors and musicians.

“They call themselves The Traveling Symphony, and they have dedicated themselves to keeping the remnants of art and humanity alive.”

A limited number of copies of the book in English and Spanish are available for free or to check out at the Carson City Library while supplies last.

“We encourage people to read the book and return it to the library or pass it along to someone else,” Lauder said.

Among the activities planned to celebrate Capital City Reads is an Art Night Out at 6 p.m. Tuesday and a Capital City Poetry Circle at 6 p.m. April 18.

“The poetry circle coincides with National Poetry Month,” Lauder explained. “People can come and just listen or they can share some of their own poetry, or read poetry they like.”

Participants can discuss what they learned and other ideas from “Station Eleven” during the Books & Brew Book Club at 5 p.m. April 20 in the Barrel Room of Alatte Coffee & Wine Bar, 507 N. Carson St.

The program will conclude with a movie night featuring “Rosencrantz & Guildenstern are Dead,” Tom Stoppard’s classic twist on Shakespeare’s “Hamlet,” at 5:45 p.m. April 24.

For a complete list of programs or to register, go to the calendar at www.carsoncitylibrary.org.