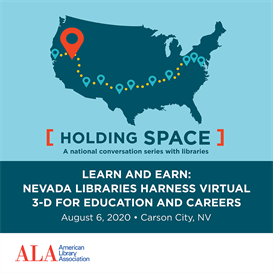 Nevada has been recognized as an innovative library leader and chosen as one of a dozen states to give a virtual, open-to-the-public tour to American Library Association President Julius Jefferson.

Those interested are encouraged to join Jefferson when he visits with library teams and the Nevada State Library, Archives and Public Records on Aug. 6 at 11 a.m. during his virtual cross-country tour called “Holding Space: A national conversation series with libraries.” The ALA expresses it wants to “hold space for all” with its network of over 55,000 members that share knowledge, build programs and resources as well as advocate for library services.

“For some time now and especially given the pandemic, we’re pressing even more so every day to help students learn as well as adults and parents earn,” said Carson City Library Director Tod Colegrove. “This imperative and immediate need is not lost on us for one moment. I have seen the expansive efforts at the state library and from our fellow libraries statewide, applying innovation to better our community members’ lives in tangible, meaningful ways.”

The Carson City-based tour will be broadcast via Zoom and archived on YouTube. Learn more and register for Holding Space at https://bit.ly/ala-holding-space. The conversation can also be followed online #ALAHoldingSpace.

Jefferson’s online stop in Carson is part of his nationwide advocacy effort to highlight the innovation and impact of all library types and to generate public awareness of essential library programs and resources. The Carson tour is titled “Learn and Earn: Nevada Libraries Harness Virtual 3-D for Education and Careers.”

Colegrove explained how the state library helped make the innovative resources Carson City Library and others in Nevada are known for available — from the Nevada Career Explorer database for job seekers and Nevada’s in-demand industries to the virtual reality technology libraries are using as a bridge to these jobs.

For example, Colegrove described, a person can go from $0 to $50,000 a year with virtual reality kidney dialysis training in 12 weeks, potentially paid for federally. The second cohort to achieve this certification is starting up shortly, and the Carson City Library can help connect residents to this effort kickstarted by the state.

“Libraries are — and have always been — community anchors, addressing challenges in times of peace and in times of crisis,” Jefferson has said. “When I was elected ALA President I knew I wanted to shine a light on programs and communities that don’t get the attention they deserve, and this virtual format allows us to critically examine our cultural moment through the lens of the most pressing issues in our profession.”