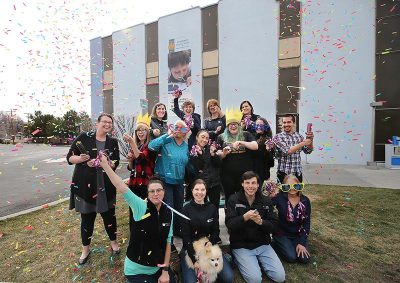 While Carson City Library staff members are celebrating being a finalist for the nation’s most prestigious library award, they are also taking note of how they got here.

“We’ve been preparing for this moment over the last decade,” said Director Sena Loyd. “For the last 10 years, staff — past and present — has been dedicated to transforming the library into a 21st century learning center.”

The library was named one of 29 finalists for the 2018 National Medal for Museum and Library Services. It is one of 14 libraries in the running; 15 museums are also finalists.

“It is such an honor to be in the running with some of the country’s biggest and best institutions,” Loyd said. “It is something this community can really be proud of.” To walk into the library today, a person is, of course, met with an array of books. A deeper look, however, will reveal a bay of public computers, workforce development classes and a Makerspace where patrons can learn to solder, sew, engrave and other skills. “All of this is designed to show people why making is so important, and not just consuming,” Loyd said. “The more we can help people understand how something works, the better they will be in their jobs, their community and in society.” But it wasn’t always that way.

When Sara Jones took over as director in 2007, the library had six public computers and very little as far as community programming.“I just thought a library could be so much more than the traditional place where you go to check out books,” Jones said. “And this library had good bones — a great staff with a deep love of learning.” She called the Great Recession in 2008 a “game changer” for the library.

“We knew we better get services available that would help people have better lives,” she said. “We had to ramp up the computers with state-of-the art programs and services.” She increased the number of computers to 20 and almost immediately saw a 75 percent increase in visits to the library. A $600,000 federal stimulus grant in 2010 helped the library get matching funds to acquire 105 computers and equip meeting rooms with smart boards, laptop stations and other technology. It also funded additional staff positions and training.

With the increased use and expansion of services, library staff drafted a master plan to include a new building. A partnership with the Hop & Mae Adams Foundation fueled a dream to build a Knowledge and Discovery Center as an anchor downtown. It quickly became a controversial issue in a divided community. Voters rejected the idea in the 2012 election.

A crestfallen staff looked for ways to carry on with the mission. Jones, who had been named the Nevada Librarian of the Year, took a job in Marin County. Deputy director Tammy Westergard took over as interim director in 2013.

“In some ways, I inherited a perfect storm — Sara had left, our youth services librarian left, our five-year plan was soon to expire, and the effort to get a right-sized building had failed, which meant the strategic plan was heavy with ‘now what?’,” Westergard said. “But the good news was the fantastic staff who remained, the steadfast library board, the loyal library foundation and the best friends anyone could have — the Friends of the Carson City Library.

“I knew anything was possible with teamwork.” Westergard was instrumental in coordinating an alliance between the library, school district and city supervisors to co-adopt each other’s strategic plans in regard to education. From that, the Digitorium was born. “The library in the following year went first, and walked the talk,” Westergard said.

“We took the last space in the building, the auditorium, and turned it into an exclusive technology center for teens.” Westergard, who is now the deputy director of the State Library & Archives, applauds the city library for continuing its vision, but hopes the community will value its services.

“Libraries are safety valves in America that, more than ever, better be expanded, loved and funded because our world is crazy, and we must have places where everyone can go to get their feet on the floor so people don’t just want to build walls,” she said.

When Loyd took over in 2014, she expanded on what had already been built, opening the library seven days a week. “I stand on strong shoulders,” Loyd said.

“I have been fortunate to work with visionaries both within the library and from the community who have shared a goal of creating a space of lifelong learning and literacy to match the times.”

Just as the library completed a refresh project to repaint the interior and replace the flooring, it received news of being a finalist for the National Medal. Finalists are chosen because of their significant and exceptional contributions to their communities. Jones said she is pleased to see where the library has come under Loyd’s leadership — competing against some of the top libraries in the nation.

“These are name libraries with dozens of buildings and lots of resources,” Jones said. To be on that list as the little library that could, is spectacular.”