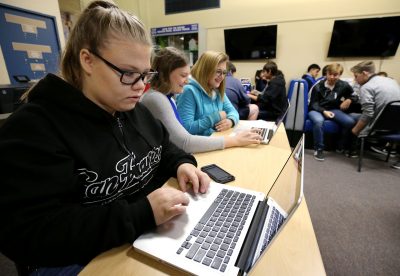 “Of course we are disappointed,” said Director Sena Loyd. “But it was a great experience as we went through the nomination process. We are so grateful for the support from this community.”

The Carson City Library was one of 14 finalists for the nation’s highest honor given to museums and libraries.

Local and state leaders shared their experiences with the library as part of the campaign.

“The library is important because of the people it provides for and the people who make it happen,” said city supervisor Karen Abowd. “They have taken money and leveraged it and gotten the grant dollars to acquire 21st century technology.”

U.S. Congressman Mark Amodei toured the library, including the Makerspace where patrons can learn to sew, solder, and use a 3-D printer or laser cutter.

Loyd said the library will continue to operate as public hub for information and technology through its innovative programming and services.

“It is an honor that we were included in the nation’s top libraries for the work we have been doing,” she said. “The community can be very proud of its library.”