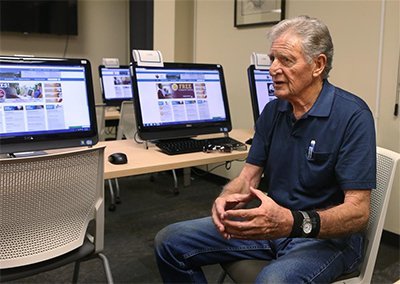 Ben Crocker has the music of between 250 and 300 arrangements stored on compact discs, which he uses in place of a band while he plays his guitar and sings. But when it came time to organize those songs into some kind of working order, he wasn’t sure where to start.” I called everybody I knew who would know what I wanted to do.” he said. “They didn’t know how to do it.” Professional services were asking $30 an hour or more to do it for him. “So I just punted,” he said. “I called the library and got a nice lady who helped me tremendously.” Susan Antipa, adult services librarian, helped him organize his CDs in a one-on-one tutoring session. “If a patron has an issue we don’t teach a class on or is kind of unique, we find the person most qualified to help,” she said. That is in addition to the regular classes offered, including, keyboard and mouse skills, Microsoft Word, Excel, resume, email and social media. “There’s so many people who just didn’t get on board with technology when it was first developing,” Antipa said. “Now, the find themselves behind. They can come here and take a free class.”

Crocker, 80, said the class was exactly what he needed. “She was so helpful and so nice,” he said. “She knew how to get into the dummy’s head and twist the right knobs.” Originally from Superior, Ariz., Crocker hitchhiked to Yerington to visit a cousin. That’s where he met Juanita — who he calls Neeter because, “she’s the neeterest girl I’ve ever met” — and married her when they were both 19. He went to work for the Anaconda mining company before becoming an apprentice diesel mechanic. “I got married at 19 and had three kids by the time I was 22, I had to work,” he said. But eventually, he left the steady job to chase his dream. For 20 years, he traveled the country as the front man in the band, Ben Crocker and the Dealers. “We called ourselves that because we dealt in all kinds of music,” he said. “We played rock, country and standards. Just about anything we could learn.” 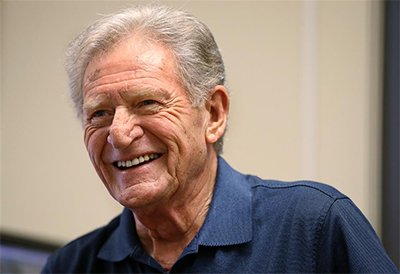 Although he worked mostly from Harrah’s Lake Tahoe, Crocker said, the band also spent a lot of time on the road. He credits his wife’s understanding during those years with the success of his 60-year marriage. “She recognized that it was my passion, and she went with it,” he said. After taking eight years off when the band dissolved, he is now back into playing music for fun. In addition to being booked to play at his grand children’s upcoming weddings, he has regular gigs at Bella Fiore Wine in Carson City. His next show will be 6-9 p.m. Aug. 22. As for technology, he’s not done with that, either. He plans to transfer all of his songs from CD to files on a tablet, so he can organize a set list before a show, but also be flexible when someone has a request. “I’m going to come back to the library for more classes,” he said.

CLASSES
To see a full list of classes offered, go to www.carsoncitylibrary.org or pick up a schedule at the Carson City Library, 900 N. Roop St.