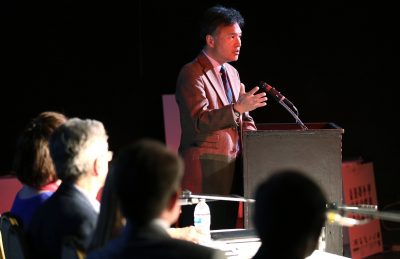 Milton Chen, 65, recently started taking jazz piano lessons. He’s learning from an instructor as well as from an app and other online sources.

“You must take control over your own learning,” the bestselling author of “Education Nation” told a group gathered at the Adams Hub for Innovation. “You need to view learning as the most important part of your life and be more entrepreneurial about it.”

Chen, who has spent his life developing the intersection of education and technology, is the executive director, emeritus, at the George Lucas Educational Foundation. He was the keynote speaker at the Knowledge Summit in Carson City on Wednesday as part of National Library Week.

He spoke to a lunchtime crowd and hosted a panel that evening at the Brewery Arts Center.

“Sometimes the most innovative places are smaller places,” said Chen, who has worked with Carson City for seven years. “This is the kind of place where you know everybody and can work with people because of the relationships you have. It creates this ecosystem of learning.”

Each member of the panel discussed one of the Six Leading Edges outlined in Chen’s book.

Ron Swirczek, president of the Carson City School Board, talked about the Curriculum and Assessment Edge. He said more than 200 Carson City businesses have partnered with the school district to give students hands-on opportunities for learning. “In abstract learning, we learn it, take a test and forget it,” he said. “There’s nothing to apply it to. We need that applied solution.”

Mayor Bob Crowell said the Carson City Library embodies the Thinking Edge. “Education is a societal value,” he said. “That’s all of us coming together to create that value. You get that in the library.”

Tricia Wentz, outreach coordinator at Western Nevada College, spoke to the Time/Space Edge. She said 500 students from 18 schools are enrolled in Jump Start, a program where students earn high school and college credits simultaneously. “We’re bringing college to high school students. We’re really proud of the fact that we’ve gotten all this participation,” she said. “We’re really proud of our students who’ve taken on this additional rigor.”

John McCleod, executive director of XRLibraries, led the Technology Edge discussion, pointing out that it took 47 years for electricity to be widely accepted across the U.S. It took 22 years for television, 10 years for computers, five years for the Internet and two to three years for smart phones to be universally used. He predicts three to four years for virtual, augmented and mixed reality to be common. “It makes people wonder about their environment,” he said. “It sparks their curiosity and makes them playful about learning.”

Tammy Westergard, deputy director of the State Library and Archives, announced a proposed remodel to the state library as part of the Co-Teaching Edge. (See below.)

Karsten Helse, with the Governor’s Office of Economic Development, spoke about advancing the Youth Edge. “If we really want to build an education nation, we have to elevate the status of education and elevate the status of teachers,” he said. “We also need to change our mindset in the private sector. Companies need to embrace this continuous learning environment.”

The Nevada State Library and Archives may soon have a new look — and a more focused purpose — if a proposal explained during National Library week is approved.

“As we strive to provide efficient and responsive public service in state government, I envision a facility such as the Knowledge and Innovation Center to be an integral capstone in our approach to take customer service, business processes and employee enrichment capabilities to the next level,” said Patrick Cates, director of the Nevada Department of Administration. “With the help of a re-imagined state library, state employees can be increasingly self-directed in 21st century skill development and 21st century public service.”

Plans for the Knowledge and Innovation Center were discussed during the Knowledge Summit on Wednesday at the Brewery Arts Center. They will go before the Nevada Public Works Board in August.

Tammy Westergard, deputy director of the Nevada State Library and Archives, said the Knowledge and Innovation Center would serve state employees and administrators much the same way university libraries serve students and professors. “The vision is to make it a dynamic resource for state workers,” Westergard said. “Every employee must be able to efficiently find information, conduct research and analysis, problem solve and purposefully acquire knowledge that is then transferred in the form of services, presentations, trainings and follow-up to various audiences.”

Plans include a learning commons, lobby, gallery and conference space. “We need to be able to attract the next generation of public servants,” Westergard said. “We also need to protect our resources that safeguard our democracy. Those resources need to be protected, and they need to be made available.”