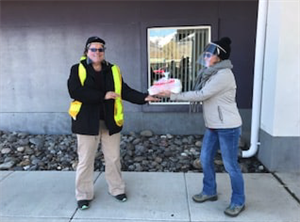 Face shields produced by Carson City Library staff have found a couple of customers. Soon after the library closed due to the coronavirus outbreak, staff began working with the library’s 3D printers and laser cutter to make plastic face shields for the city’s front-line workers.

Tod Colegrove, Carson City library director and former administrator at the Nevada State Library, Archives and Public Records, reached out to first responders, the Senior Center, and his successor at the state library. The library and archives is responsible for the state’s mail room, which has been inundated since Gov. Steve Sisolak directed the state’s nonessential businesses to close. “I’m told last week they handled nearly nine and a half months’ worth of mail in one week,” said Colegrove. “Talk about critical path/first responders. They’re a tiny crew, operating in the heart of Carson City. If a couple of them get sick that could jeopardize a lot of out-of-work Nevadans.” Most of the surge in mail is due to unemployment claims, said Tammy Westergard, Colegrove’s successor as administrator at the state library. 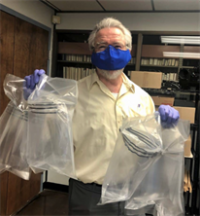 The state mail room handles incoming and outgoing mail at more than 280 mail stops for nearly 400 state agencies and is staffed by a team of 20 workers. That team has been taking safety precautions from the start and Westergard was thrilled to add the library-made face shields to their arsenal. “The use of these 3D printers under Dr. Colegrove’s leadership to make personal protective equipment for the state is really an incredible example of the power and place of libraries in our modern communities,” said Westergard. Westergard holds a virtual meeting each week with the state’s libraries. “Through this forum, Dr. Colegrove has called on librarians across the state to activate their own 3D printers to begin making PPE for their communities. He shared the 3D print files and instructional guides with them, and we understand that several public libraries will begin production of face shields as early as today,” said Westergard. “I’m so proud to see libraries across Nevada ‘moving and shaking’ to meet pressing community needs in this ever-changing reality of the COVID-19 pandemic.”

Colegrove also got in touch with the Carson City Senior Center. Soon after closing its doors, the Senior Center continued serving lunch to seniors in their cars via a drive-through set up at the front door of the center. Volunteers are now serving 100 or so seniors a day. The volunteers took safety measures to protect themselves and the seniors they were serving, but additional protection was welcomed. “We are now using the shields,” said Courtney Warner, executive director. “They work great because our seniors can see our faces and they work excellent for the hearing impaired.”

Library staff delivered 50 face shields to the Carson City Sheriff’s Office where they will be used by personnel who work with inmates in the jail and infirmary, according to Sheriff Ken Furlong. And Colegrove said he is working with the emergency operations center to determine if the shields are appropriate for other first responders.