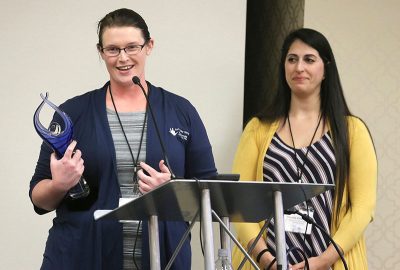 Sena Loyd, who will mark four years in January as director of the Carson City Library, was named Nevada’s Librarian of the Year. “I was so honored to receive the award,” Loyd said. “Without the support of my staff and colleagues, this would not have been possible. I dedicate the award to all Carson City Library staff, past and present.”

The award was announced Wednesday during the Nevada Library Association’s annual conference in Lake Tahoe. Loyd was nominated by the Friends of the Carson City Library.

“Through her leadership, innovation and forward thinking, (Loyd) has helped bring about new technologies and opportunities for all members of our community,” Phyllis Patton, president of Friends, wrote in the nomination. “With limited physical space, staff and resources, these new technologies were achieved through aggressive grant applications, partnerships with the local school district, college, Boys and Girls Club and through fundraising efforts with the Friends of the Carson City Library.”

Loyd said that during her tenure, she has worked to evolve the library to meet the constantly changing needs due to technology. “This community values books, and we will always have books,” she said. “At the same time, we have to embrace 21st Century skills and help guide the community to digital literacy.” Additionally, Loyd pointed to building community relationships as a priority. She said one of her greatest accomplishments was bringing Discover Tech: Engineers Make a World of Difference to the library early in her career. That project transitioned into the creation of the Digitorium and a teaching partnership with Carson High School. “That set the stage for everything we’ve been able to do since,” Loyd said. “We have shown the community we efficiently use taxpayer money in a way that benefits the greatest number of people.”

Patton also pointed out the nontraditional ventures, such as the library’s partnership with Western Nevada College to offer the manufacturing certification program, MT1, making the Carson City Library the first U.S. library authorized with a certified trainer and assessment center. “Through this partnership, a total of 61 students graduated with an MT1 certification,” Patton wrote. “Students have secured jobs with local manufacturing companies, including the new Tesla Gigafactory.”

Loyd has also been instrumental in lobbying the state Legislature on behalf of libraries across the state. “We belong to a cooperative,” Loyd said. “Through that cooperative, our patrons have access to materials and collections they wouldn’t necessarily have otherwise. Together, we’re stronger.” Patton said Loyd’s willingness and effectiveness in working with other community and educational organizations is an asset to the library and the people in serves. “Director Loyd has continued to seek out opportunities, making the Carson City Library a relevant, modern and evolving example of what at 21st Century library can be when we all pool our resources and work to benefit the entire community,” Patton wrote.